Don't Give Up!!! New Ideas can Pay off Big 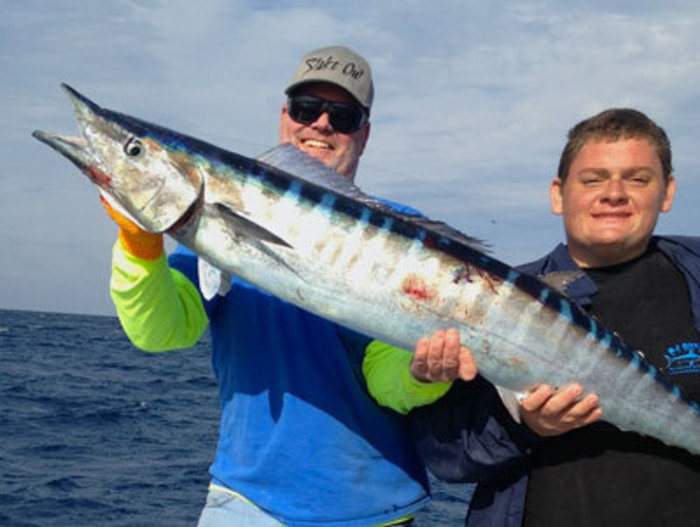 I was so excited to fish for sailfish last Saturday. I thought that the sail bite was going to be epic due to the perfect weather conditions. I even brought extra release flags to show you how confident I was. Well, things didn't go as I planned. By 1:30 the only thing that we had caught was a 5lb kingfish. My whole crew was frustrated as we sat there looking at the perfect baits swimming under our kites. My cousin Fred then said to me,"I need to get in because my son has a baseball game in Gainesville". His son Taylor Gushue is the starting catcher for the Florida Gators. He was going to drive to Gainesville now for a 7:00 game?? As much as I wanted to fish I knew that if it was me I would have wanted to go in as well.

We wound in all of the baits and headed for the dock to drop him off. We got back in time for him to make his trip but I was still frustrated from our fishing trip. As he walked away I looked at my crew and asked if anybody would like to go back out for the afternoon. They looked at me with all smiles and said Heck Yeah!!!! We pulled away from the dock and headed towards Hillsboro Inlet. As we rode up the intracoastal for the second time that day we all felt a new sense of excitement. It was as if it was a new day now and we wouldn't be denied a second time. We were fired up to put something in the boat.

The wind was blowing so hard out of the northwest that the seas would be really dusty outside of 150 feet of water. We drove out of the inlet and headed up the beach to the north about a mile and it was flat calm near the shore. I stopped the boat and said to Wes Seldner a longtime buddy, "Okay lets put them out". He looked over the side of the boat realizing it was 20 feet of water and said, "right here"? I said "yes why not. We will get blown offshore pretty fast so lets give it a try." I put out the kite with 3 baits hanging while Wes and Max Goliger put out 2 spinning rods with goggle eyes on the opposite side of the boat. We were fishing for about 20 minutes when one of the spinning rods bent over. Max picks up the rod and begins to fight what I think is a shark. I was so sure of it that I turned around and watched my kite baits. After about 20 minutes Max yells "I see silver". That meant it must be a kingfish. I was surprised but not that surprised as many big kings are caught in shallow water this time of the year. I grabbed a long gaff and walked over to Max. As I looked over the side all I could see was tiger stripes on the side of a beautiful wahoo. We all said a few choice words as the fish came boat side. We sunk the gaffs and pulled this 42lb beauty into the boat. We were all shocked at what we had caught. Never before had I caught or even heard of a wahoo in that shallow. We were so happy!!! The second trip of the day had paid off!!

We returned to the dock, a hero of sorts. I called my cousin Fred to inform him of our success. Later that night Taylor Gushue his son knocked in the winning run to beat the Miami Hurricanes. What a day it was....