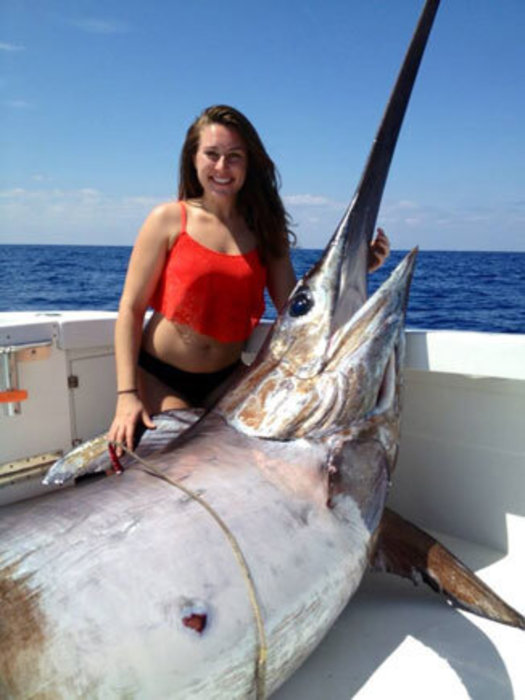 I don't know what it is but my daughter Elli Boyle and Max Goliger, who is an employee at RJ Boyle Studio have some serious luck. It seems like every time I fish with them we catch big swordfish. Sunday would prove no different as we boated a 565lb swordfish. A three hour battle filled with emotional highs and lows. Believe it or not there were times in the fight that we thought we lost the beast. The fish was so unpredictable as it would pull drag down into the depths and then completely change direction and head for the surface. The rod would stand up straight with no drag as if we lost the fish and we would all sigh with disappointment when all of a sudden the rod would bend over again. The emotional roller coaster would continue throughout the fight as I missed the fish with the harpoon at least 20 times. I just could not hit the fish at close range. When we finally did get the harpoon in the fish he pulled out 850 feet of harpoon rope twice before giving in. Teamwork proved imperative as we all collapsed with exhaustion after the fish was hauled aboard. We had to flag down another vessel to aid us in boating the giant sword. At days end, as we headed west toward the sunset we all reflected on a day that we will never forget.