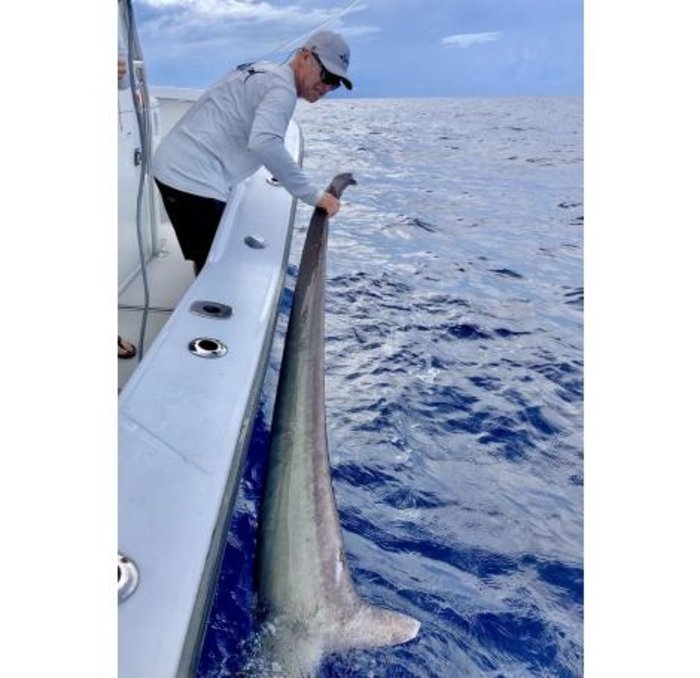 Pictured here is my mate John Bassett holding an 8 foot tail from a giant big eye thresher shark that we caught last week. Not only are they one of the craziest looking sharks but they put up a world class fight. We release all thresher sharks that we catch here as they are a restricted species list. We probably catch close to five of these special sharks every year while we are sword fishing out in the deep.

There is no other fish that can pull drag like the thresher shark because of the huge tail. This particular shark was very tired when we got him both side after a 2 1/2 hour battle and the hook was stuck right in the tip of his tail. These sharks kill their prey with their tail by swatting it. It is amazing that a fish could hit a bait with that kind of pressure underwater! There are two types of thresher sharks, one being the big eye thresher shark and the other being the common thresher shark that is caught in the northeast. I have personally never eaten any of these sharks but people say they are excellent. That being said I would rather eat a cheeseburger.

As for the bait used squid is they’re favorite food and I can tell you right now we have tons of squid out there. If your dream is to catch one of these thresher sharks now is your time.

Give us a call and we can book a trip!