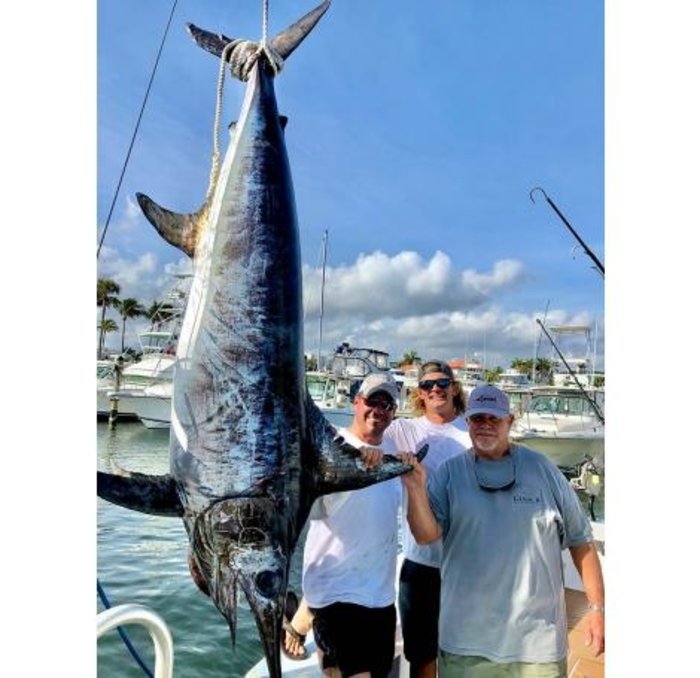 I received several calls this week from guys looking to strike gold. If catching a big swordfish is your dream now is really the time to go. The migration of large fish is happening and will continue for the next 60 days or so. We keep excellent logbooks  and after fishing for all of these years for swordfish we feel like we are confident in our forecast for swordfishing. Joe Dellapietra called us for a charter aboard our sportfish boat “Lisa B”. He told us he had never caught a swordfish but had his own boat and was ready to learn. We left the Lighthouse Point Marina at 7 AM and headed 15 miles offshore to a depth of 1700 feet.

The first drift yielded nothing but the weather was changing by the end of the drift. The wind switched from Southwest to Southeast and there was a spike in the barometer. Swordfish become very active when there’s a spike like this. It is as if they sense a storm coming and begin feeding quickly. Twenty minutes into the second drift our mate Cody yelled “there’s a bite”!
He ran over to the rod and teased the fish by moving the bait. We all waited for the rod to bend and boy did it ever! We were hooked up and began fighting this big swordfish. The fish did not fight that hard until it was up near the boat. We thought it was a rather small fish by the way it was fighting. We got really close to the leader when all of a sudden the fish decided to jump and we were all shocked at the size of the fish!

All in all we fought the fish for about an hour and a half before closing the deal. We put the fish on the deck and headed for home early with smiles on our faces. When we got back to the Lighthouse Point Marina we hoisted the big fish up on the scales and she weighed in at 356 pounds. Joe looked at me and said “that was all I wanted for Christmas”. We were happy to play Santa Claus this day.

I hope everybody has a wonderful Christmas and a safe holiday season.

For an up to the minute fishing report please call the shop at 954-420-5001 and we will guide you in the right direction as to what to fish for and what is biting.