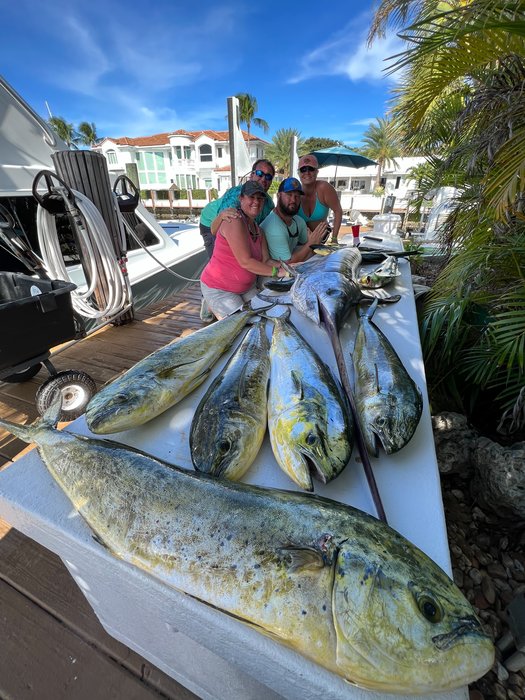 Pictured here is the Riley party from South Carolina with a spectacular catch aboard the “Lisa B” from a few days back. Our goal was to land a swordfish. We set up shop about 16 miles offshore at 8:30 in the morning. We fished for an hour before getting our first bite. We hooked the swordfish on a rigged bonito strip with a glow skirt. We fought the fish for 45 minutes before landing everyone’s first swordfish. As we put the baits out redeploying on our second drift we got covered up in Mahi Mahi. We threw spinning rods tipped with bait and one by one began to fill the box. It sure is nice when a plan comes together. When we got to the dock we cleaned the fish for well over an hour and a half. Everybody went home with plenty of dinners for the next month.

The near shore fishing was a bit slow this week. A few smaller Wahoo and lots of bonito were landed. If you’re going to spend time fishing this weekend I would suggest running offshore to look for mahi. There is a lot of scattered seaweed right now so don’t be afraid to pull up on the patches and throw a few live baits to prospect.  You can also troll around them quickly to see if the patch is holding fish.