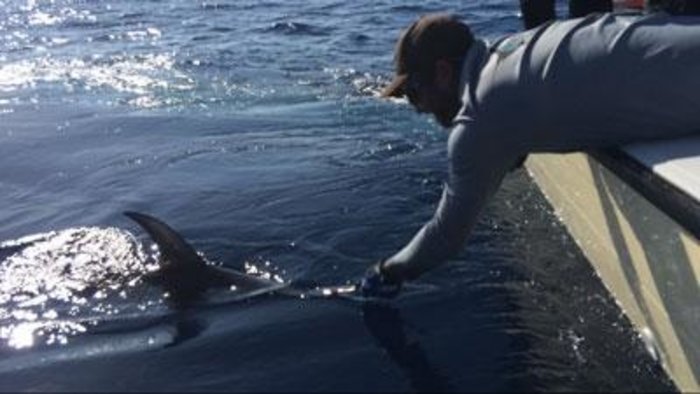 On Wednesday of this week we headed east in pursuit of a broadbill swordfish. As we approached the sword fishing grounds I could not help but think about how I was going to handle a 1,000 pound fish. No swordfish has ever been caught on a rod that big here in Florida but we know they exist. I have heard a handful of stories about guys fighting giant fish for hours but the story always ends with the same result. Most of these big fish were lost for some reason due to tackle failure, angler failure, or just plain chance.
We deployed our first bait and waited for a short time before the rod bent over. The funny thing about giant swords is that they usually swim for the surface once they have been hooked. The fish on our line had all of the tell tale signs of being a giant. As the fish came close to the boat we all stared over the side waiting for the monster to appear. We finally got a glimpse of the fish as it swam by the boat. It was so beautiful to see the colors in this fish and its peppiness as it jumped around. The fish was just big enough to harvest but we were set on catching a big one. We unhooked the fish and returned it to the sea to fight another day. We did not catch the 1,000 pound sword that day but we did catch two that weighed 125 pounds.