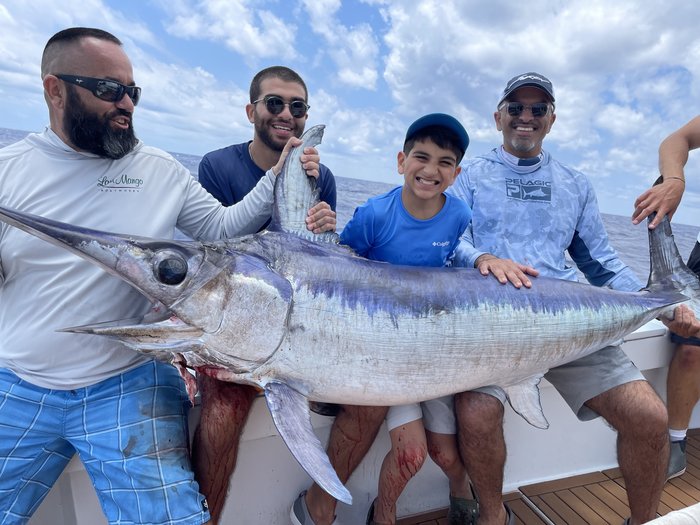 Pictured here with the Swordfish is the Fly Navarro charter from Saudi Arabia with their first ever broadbill sword fish we caught earlier this week aboard the “Lisa B” out of Lighthouse Point. We caught this fish on a bonito taco in 1650 feet of water. The swordfish were snapping as we had three bites in a one-hour period. It took over two hours to land this beautiful fish. This is a great time to catch a big swordfish as there have been several landed in the 300-to-400-pound range over the last two weeks.

Pictured here with the tuna left to right is Richie Clawges and myself with a 75-pound yellowfin tuna. For the tuna action we ran over to the Northwest Providence channel near Freeport. We were using live bait and sardine chunks to catch these fish. This is an extremely long run to the grounds. Along with the yellowfin we caught blackfin tuna and skipjack tuna. The toughest part of fishing for the Yellowfin over there is the shark issue. We had several fish eaten by sharks after the hook up. It is really awful when this happens! The sharks start circling the boat just waiting for an easy meal. After all the effort, money spent, and energy put towards this fishing it sure puts a damper on things to see such a beautiful fish eaten by a shark. We have a serious shark problem not only in the Bahamas but in our local waters as well.

If you have any questions or need to get set up for fishing give us a call at the store.