Swordfishing Offshore is Heating Up! 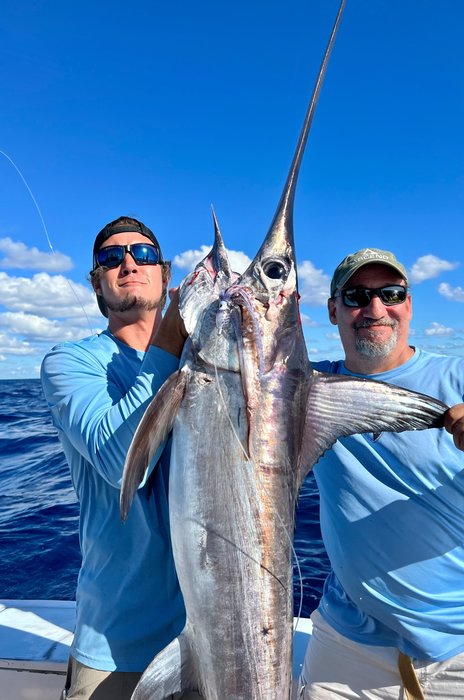 Pictured here is Rodney Wagner and our Mate on the “Lisa B” Luke Mears holding up a Swordfish from a few days back. This trip would prove to be hugely successful as we landed multiple Mahi Mahi as well in the all day trip. We caught two swordfish but released one to be caught another day. While we were fishing we realized due to the excitement over the radio that the swordfish were biting for everyone! John Michael Lavergne out of Lighthouse Point Florida boated a 500 pound sword that took nearly 3 hours to land. John Michael works at our store RJ Boyle Studio and is well versed at Swordfishing. I would highly suggest over the next three months a swordfish trip if it is on your bucket list. Historically October through January is the time to catch big swords. The migrational pattern pushes them right here off our coast. As a bycatch of Swordfishing the mahi-mahi fishing has never been better. We simply float ballyhoo back behind the boat and pick them off all day long when they’re around. Closer to the beach the fishing has been mediocre this week. Boats caught a few kingfish an occasional Mahi Mahi and a sailfish or two. Hopefully things heat up for this weekend near shore. For an up to date fishing report give us a call at the shop. 954-420-5001.